— Lima, Peru and its culture on the world stage, showcasing a creative, original, diverse and contemporary place.

In 2019 Lima (Peru) hosted the Pan and Para Pan American Games, unique occasion to position the city and the whole country as internationally relevant, in a socio-economical equilibrium, open to welcome tourists and capitals, but, above all, proud of its citizens.

The Ceremonies were part of the challenge to take this opportunity, with the goal to showcase Lima in front of Limeños and the Americas, to convert messages into beautiful and meaningful images and an engaging experience.

Balich Wonder Studio has conceived a ceremony with the hope that every Limeño and Peruvian would connect to the cultural and natural aspects of their country, to the stories, music, myths, images, characters, traditions, flavors and colors that most move them, because they are their own essence. As they are so diverse, so unique and so rich, these ingredients would be just as exciting and significant for the Pan American athletes to celebrate and for the audience that welcomed from all over the world.

The Pan Am Committee was looking for the best value-for-money option, asking for production synergies and a creative dialogue among the 4 ceremonies.

Balich Wonder Studio team spent 3 month in Peru while preparing the tender answer, deep diving into its culture, from its history to its contemporary artistic scenarios, getting to know its excellences, from the worldwide renowned gastronomy to regional micro-cultures. Both for the creativity and the production solutions, the team tried to integrate as much as possible local talents and experts, developing a legacy delivery plan and maximizing in-country value.

The Opening Ceremony “Amazing Peru!” meant to connect to the cultural and natural aspects of the country, including stories, music, myths, images, characters, traditions and flavors. As Peru is so diverse, so unique and so rich, those ingredients were just as exciting as significant for the celebrated Pan American athletes and for the audience from all over the world.
The Ceremony depicted the past and the present of a country in which nature and culture intertwine, waving in a great fabric. An immensely sophisticated country where the Amazon rainforest was born and the first civilization of the Americas emerged.
The set design was based on the concept of duality and contained references to Peru’s natural elements and cultural heritage. The natural world was reflected in the set’s main feature: a sculptural rendition of the Nevado Pariacaca, the sacred mountain of Lima, with the cliffs at the bottom, and the Amazon river crossing the field of play. Peru’s culture was represented by its oldest and most recent civilizations from the pre-Hispanic period: the Caral-Supe with the temple of Caral and the Inca with the fortress of Sacsayhuaman. The two stages on the sides of the mountain hosted both the Country’s and the Games’ flags. The speech on stage was a reference to the many huacas (monuments) that have been built by pre-Hispanic Peruvians over the centuries. The base of the mountain, which measured more than 20 metres high and 35 metres wide, represented both the Pacific and Lake Titicaca and its lines met in 49 points, representing the languages of Peru. 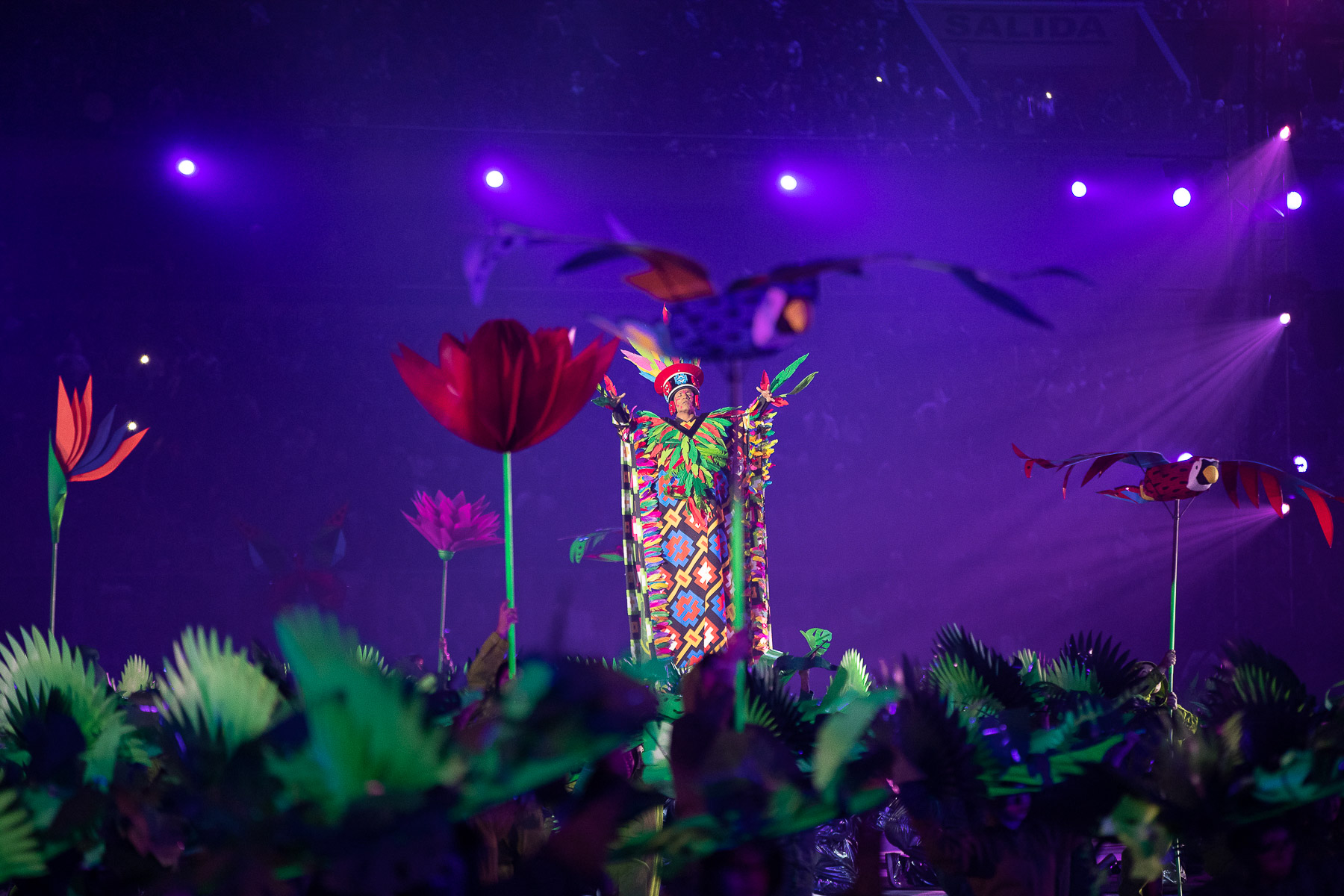 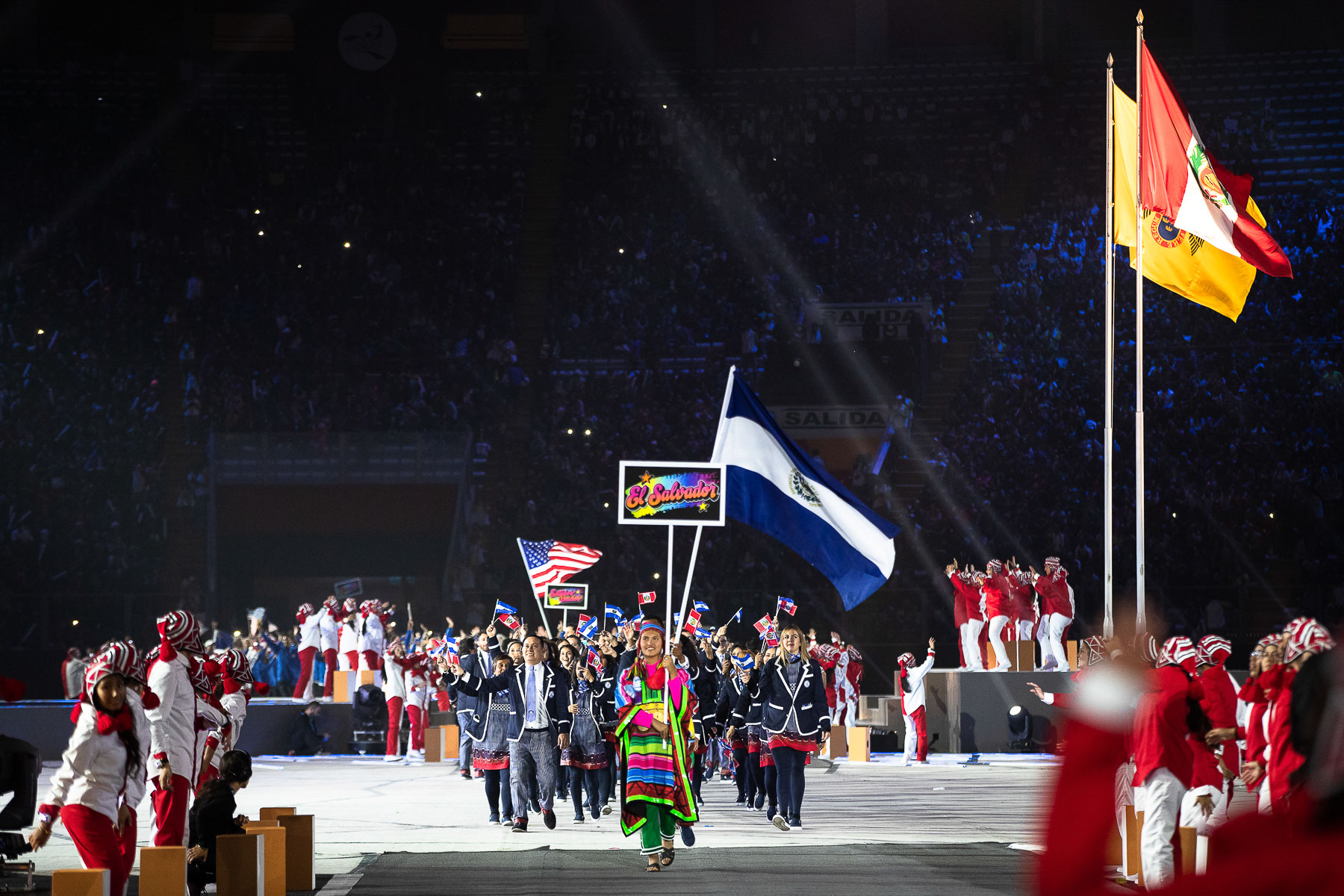 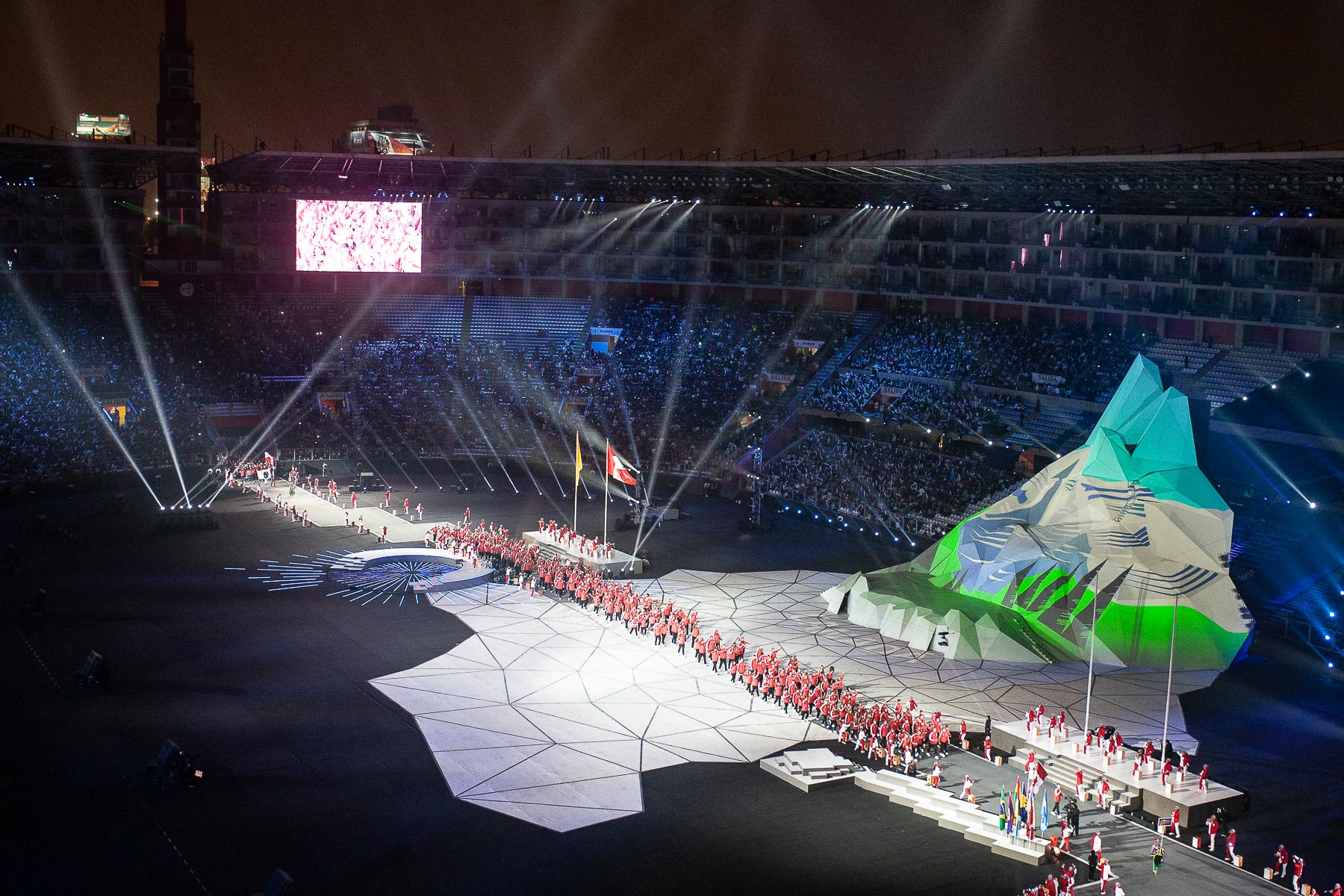 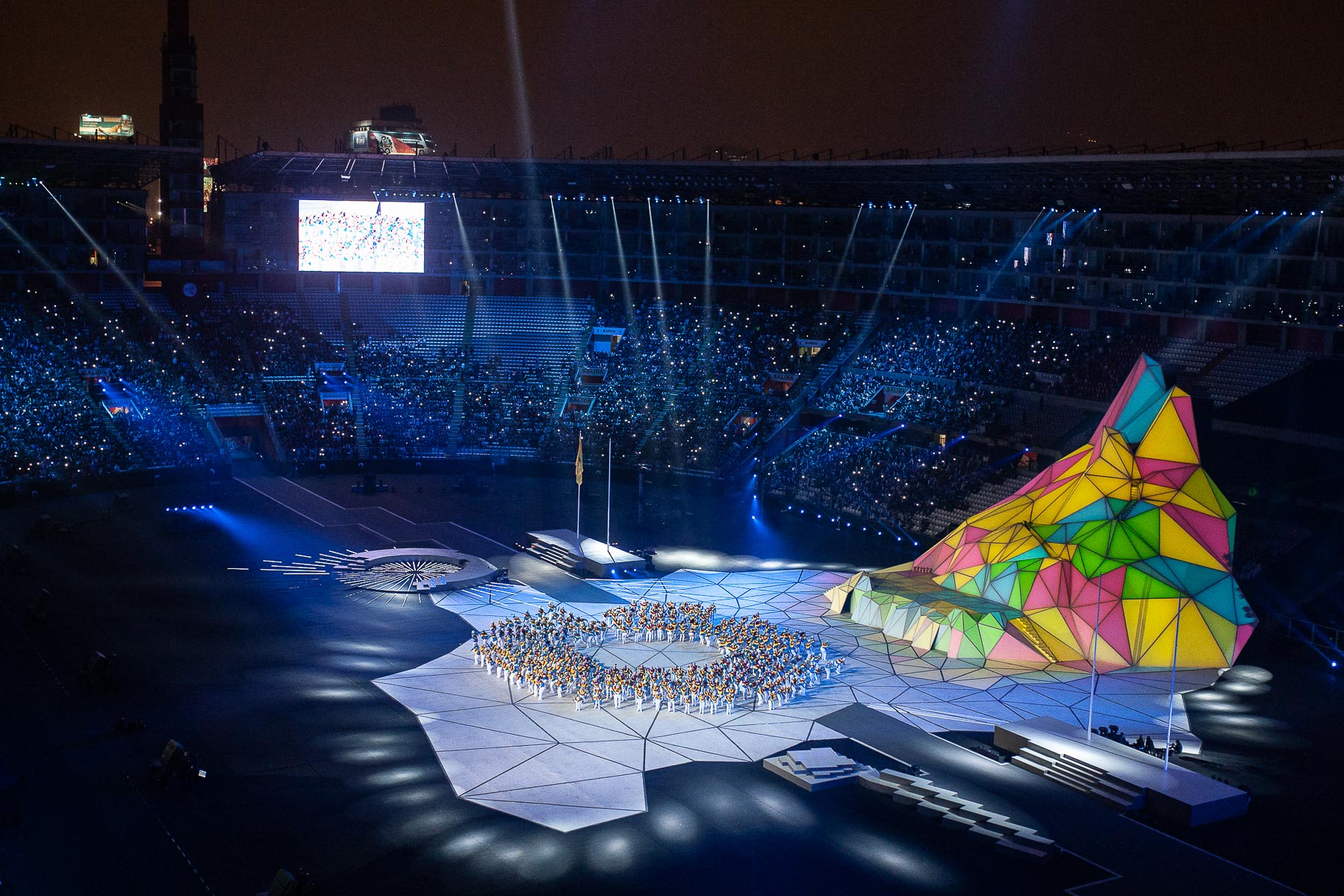 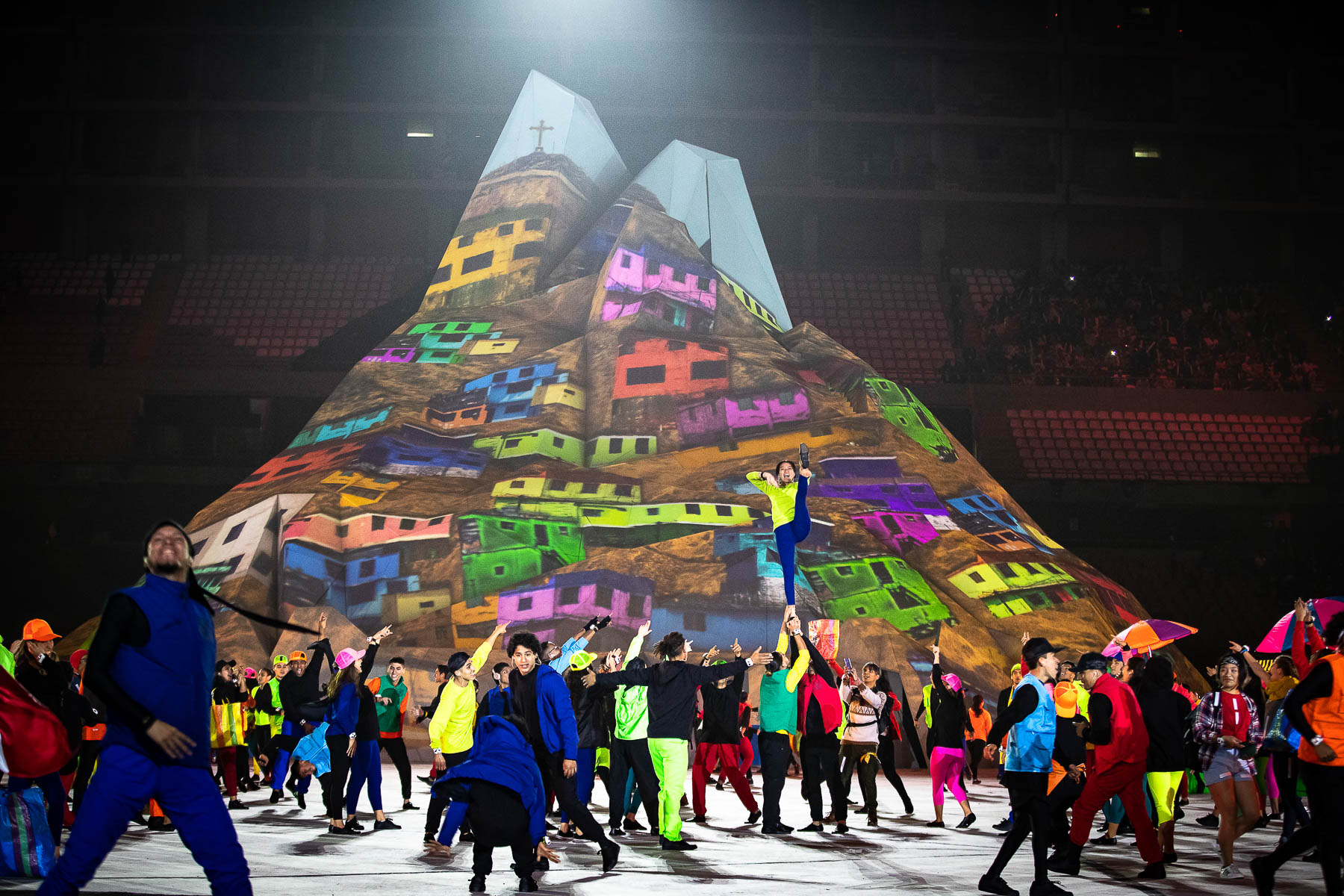 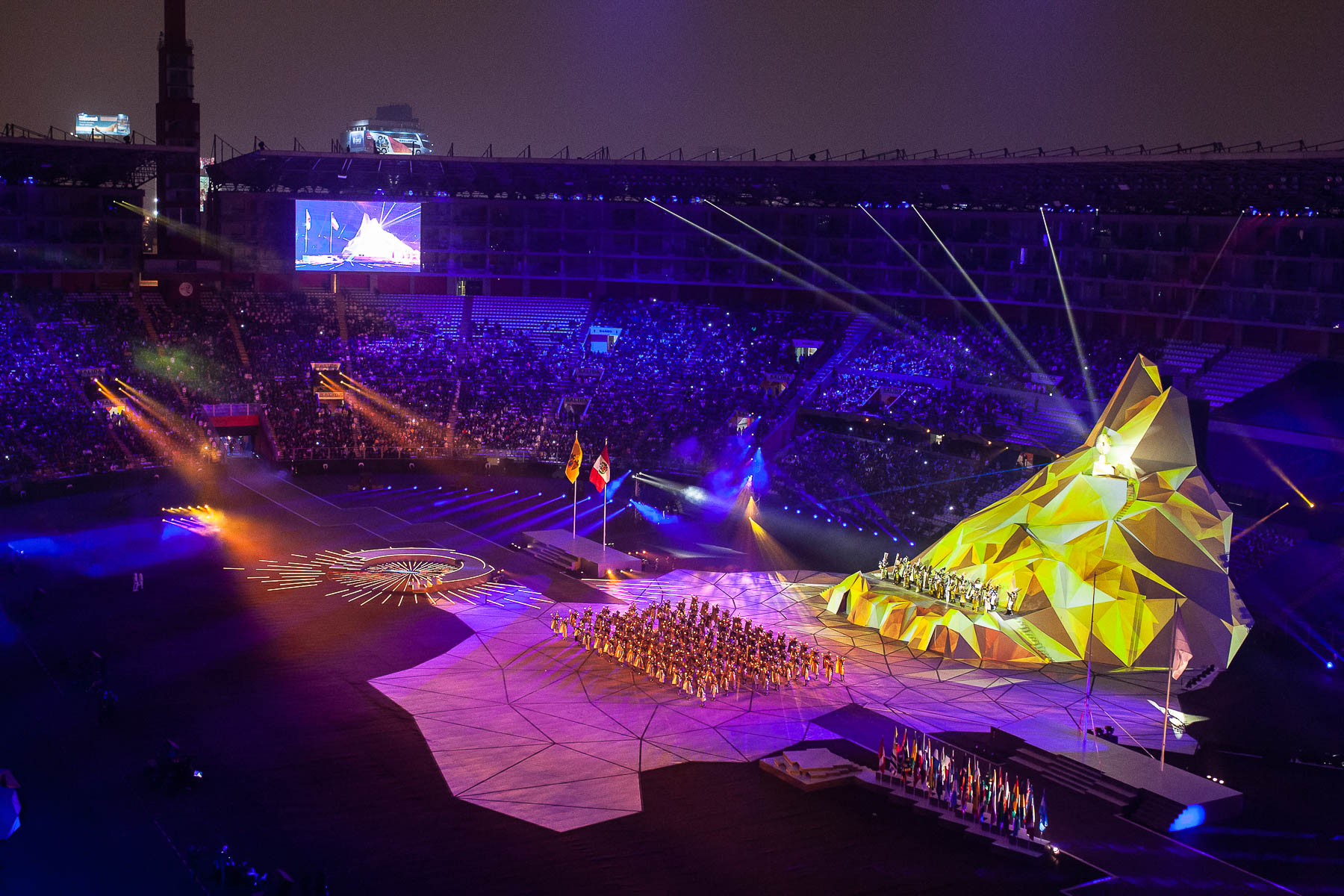 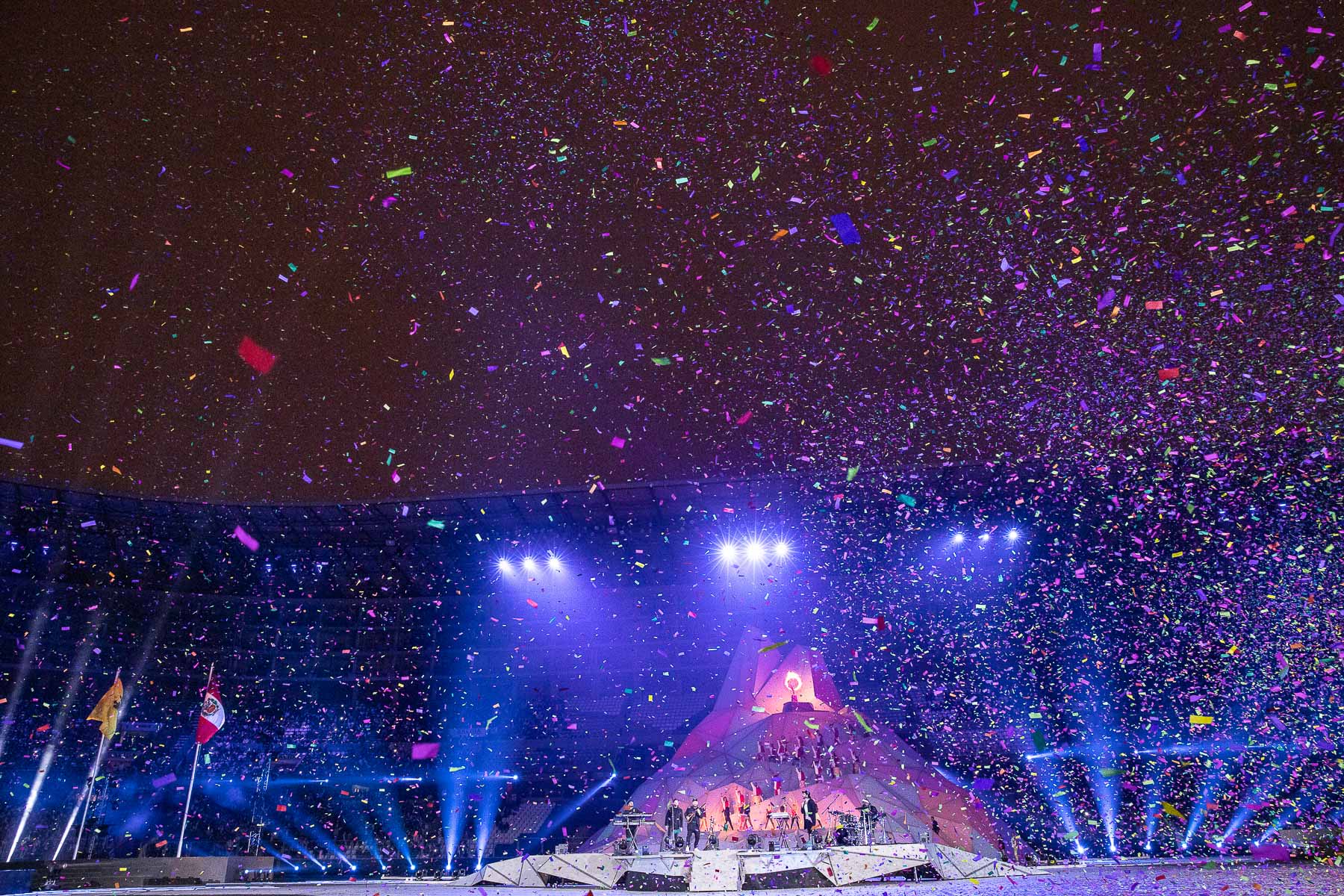 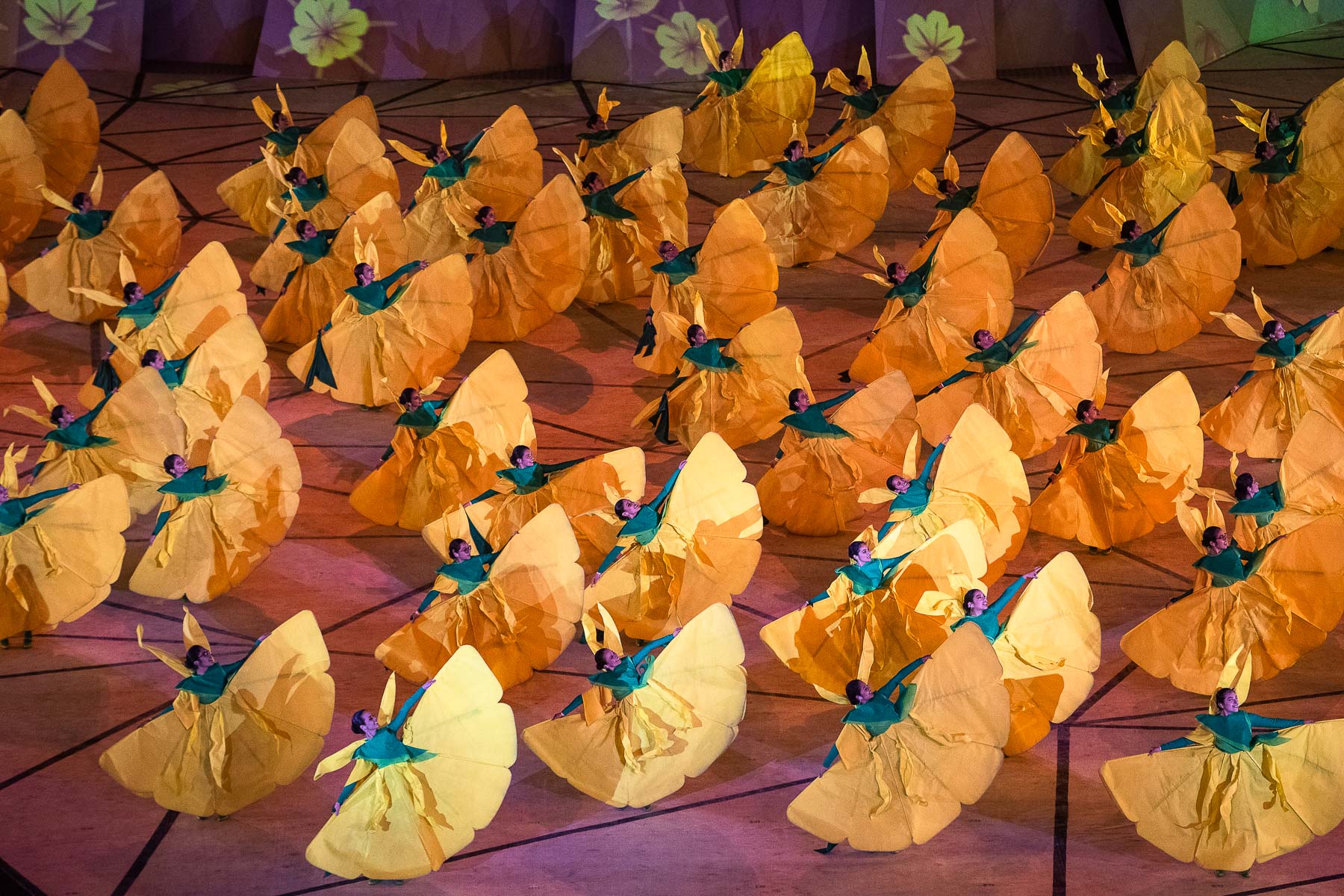 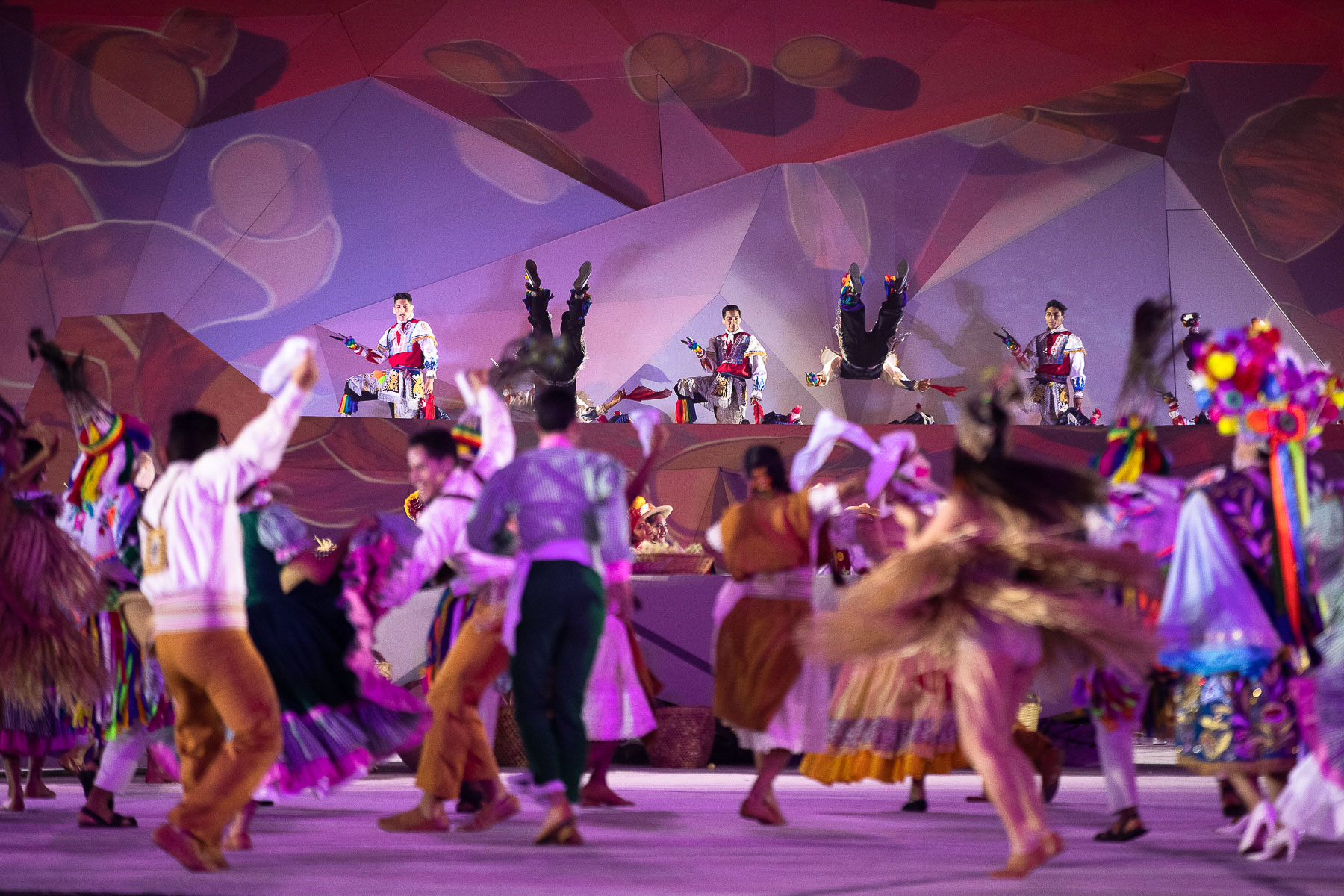 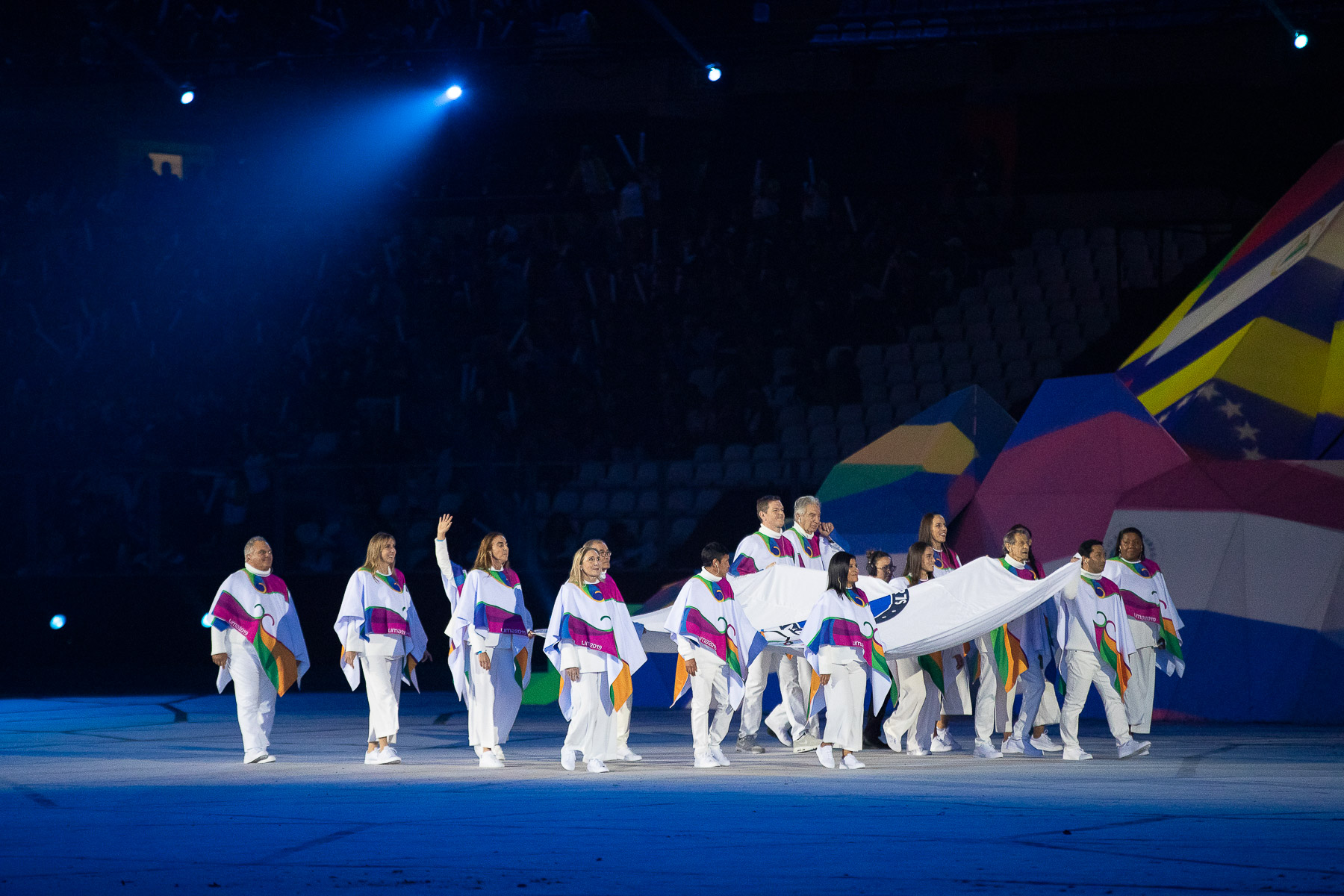 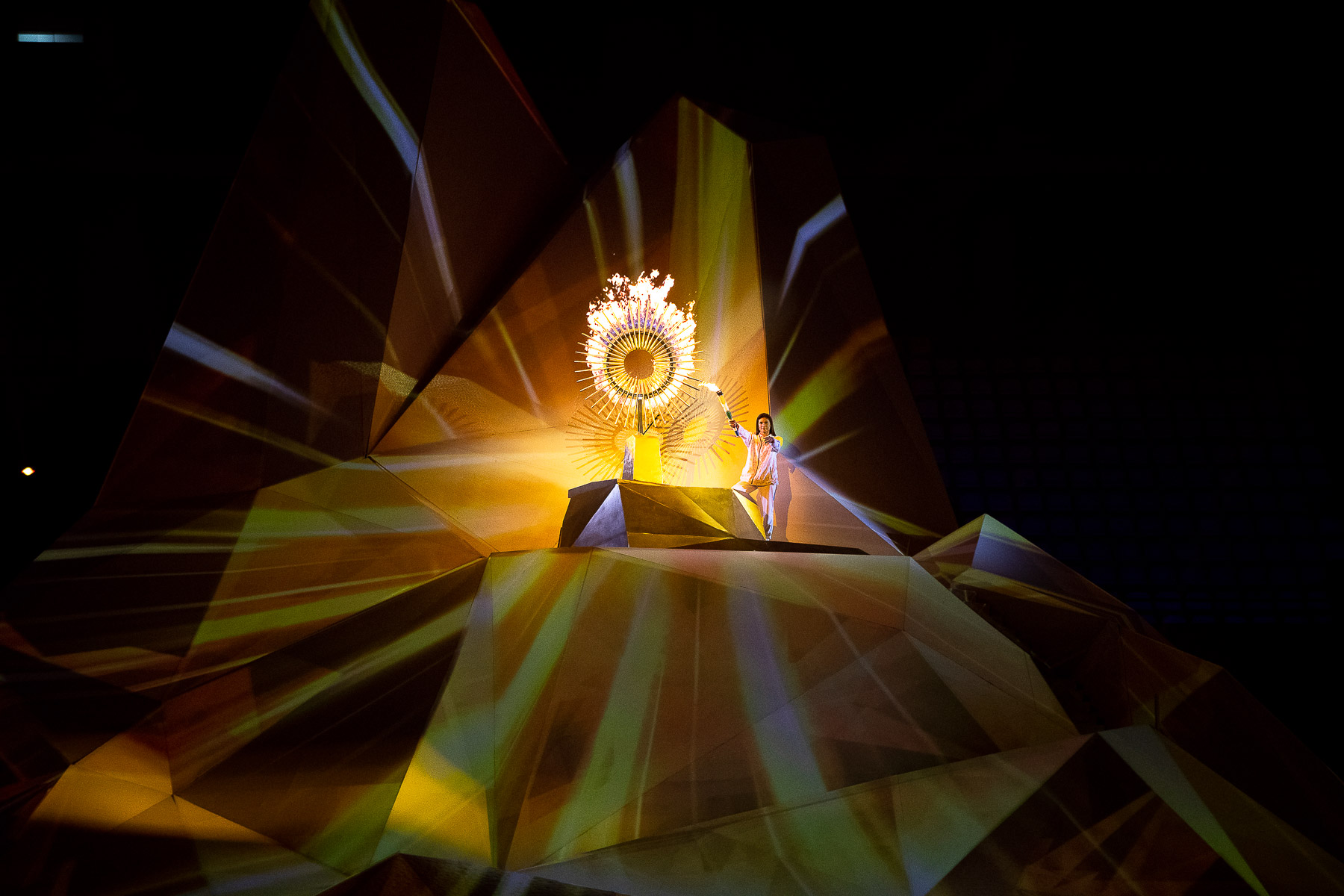 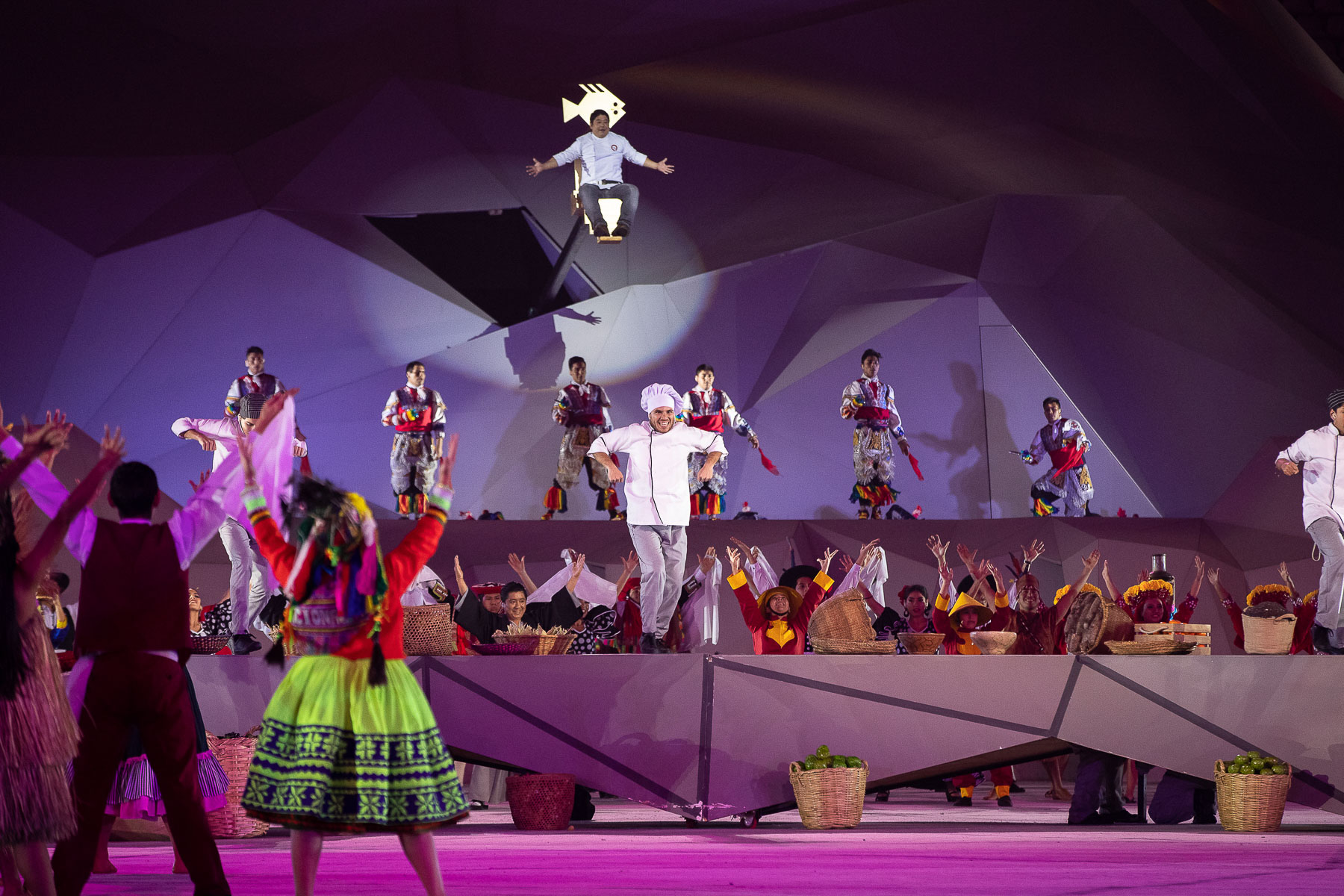 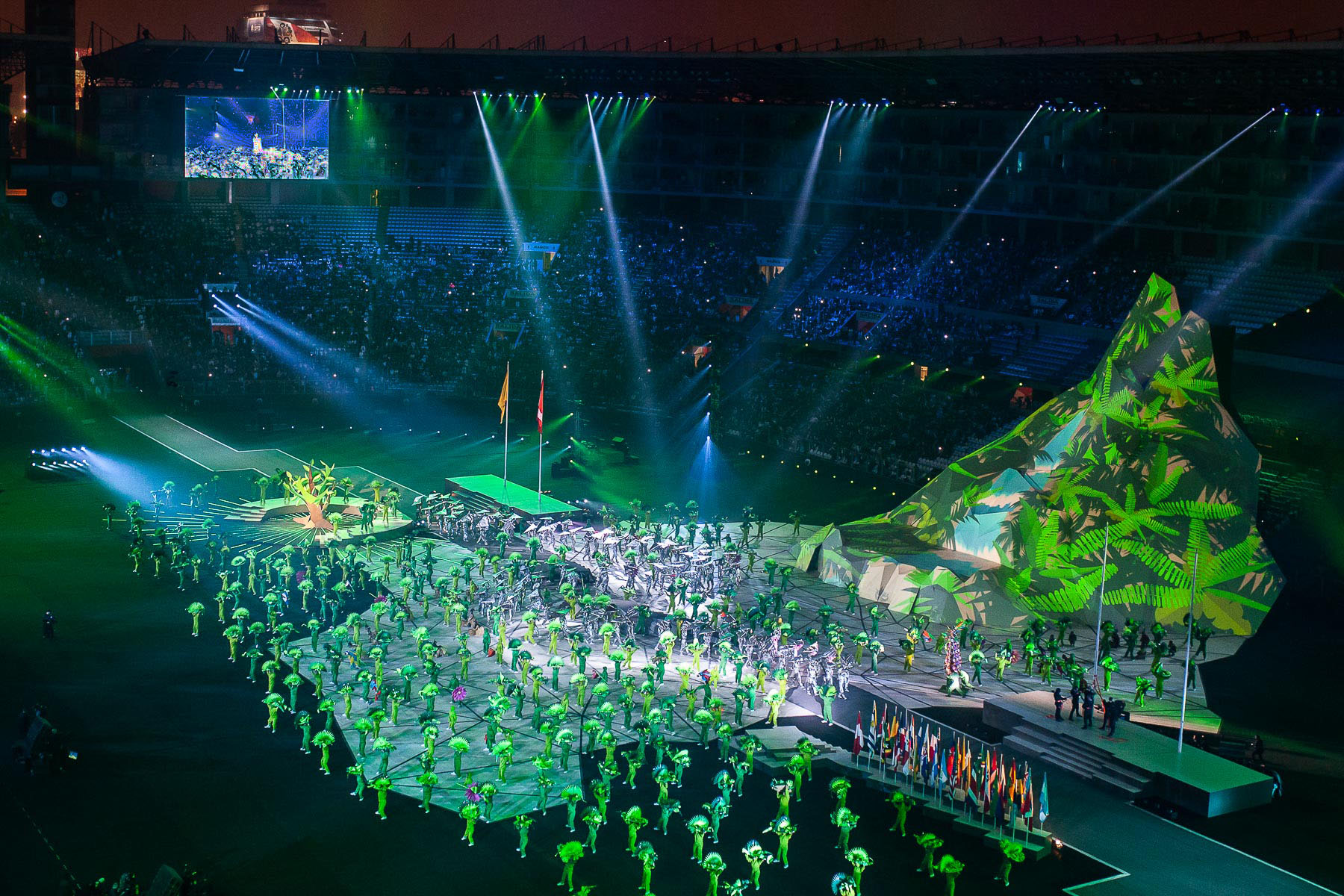 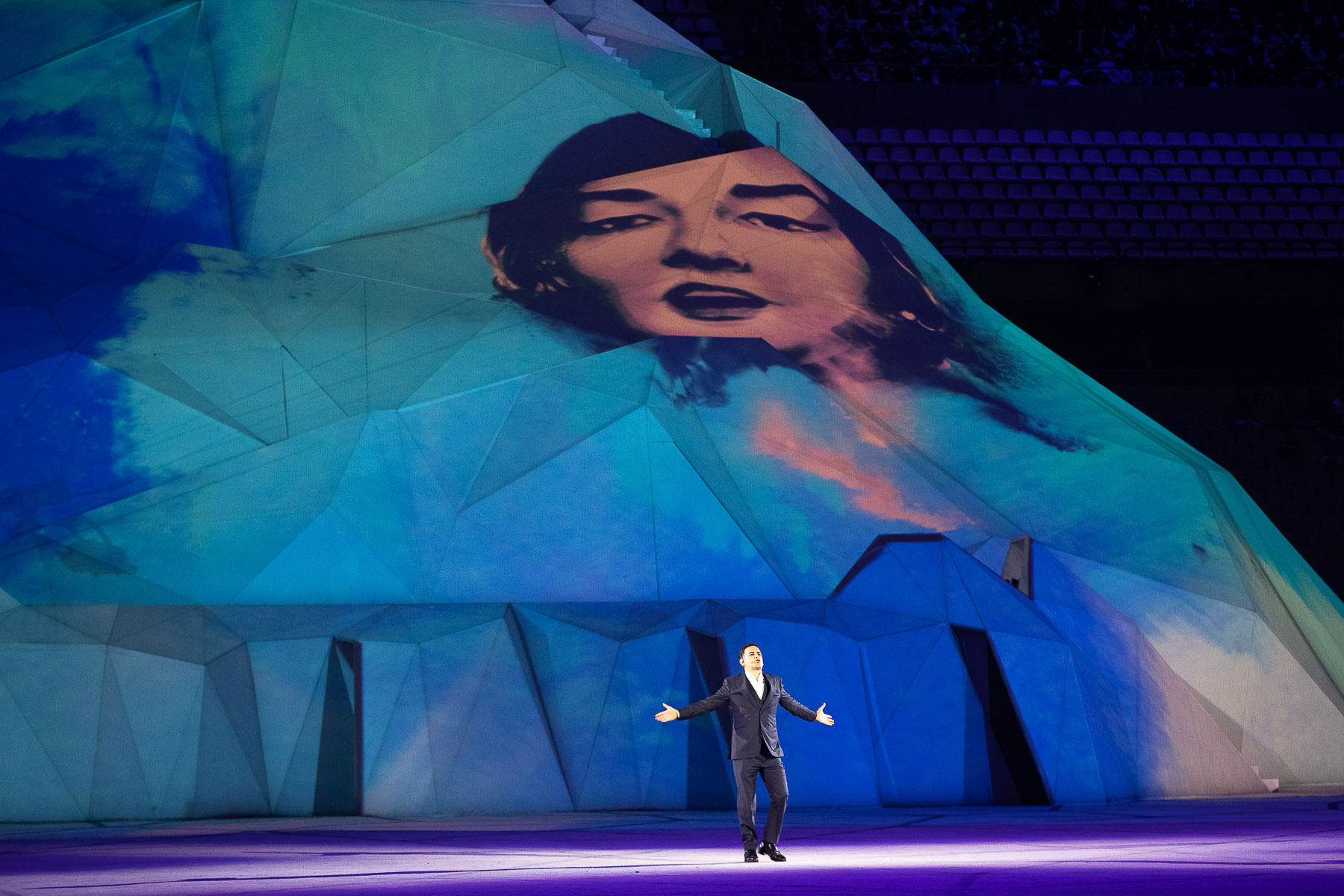 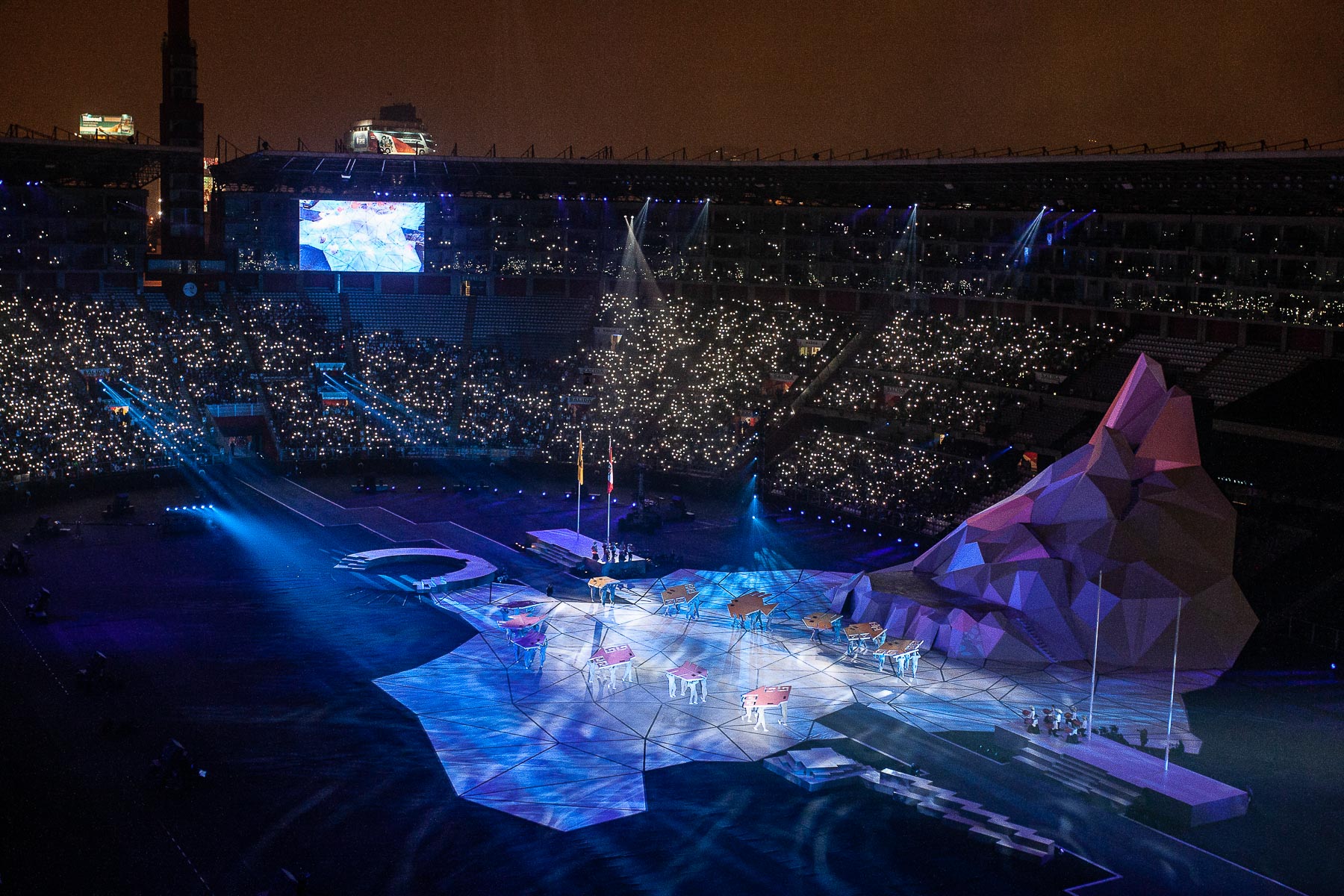 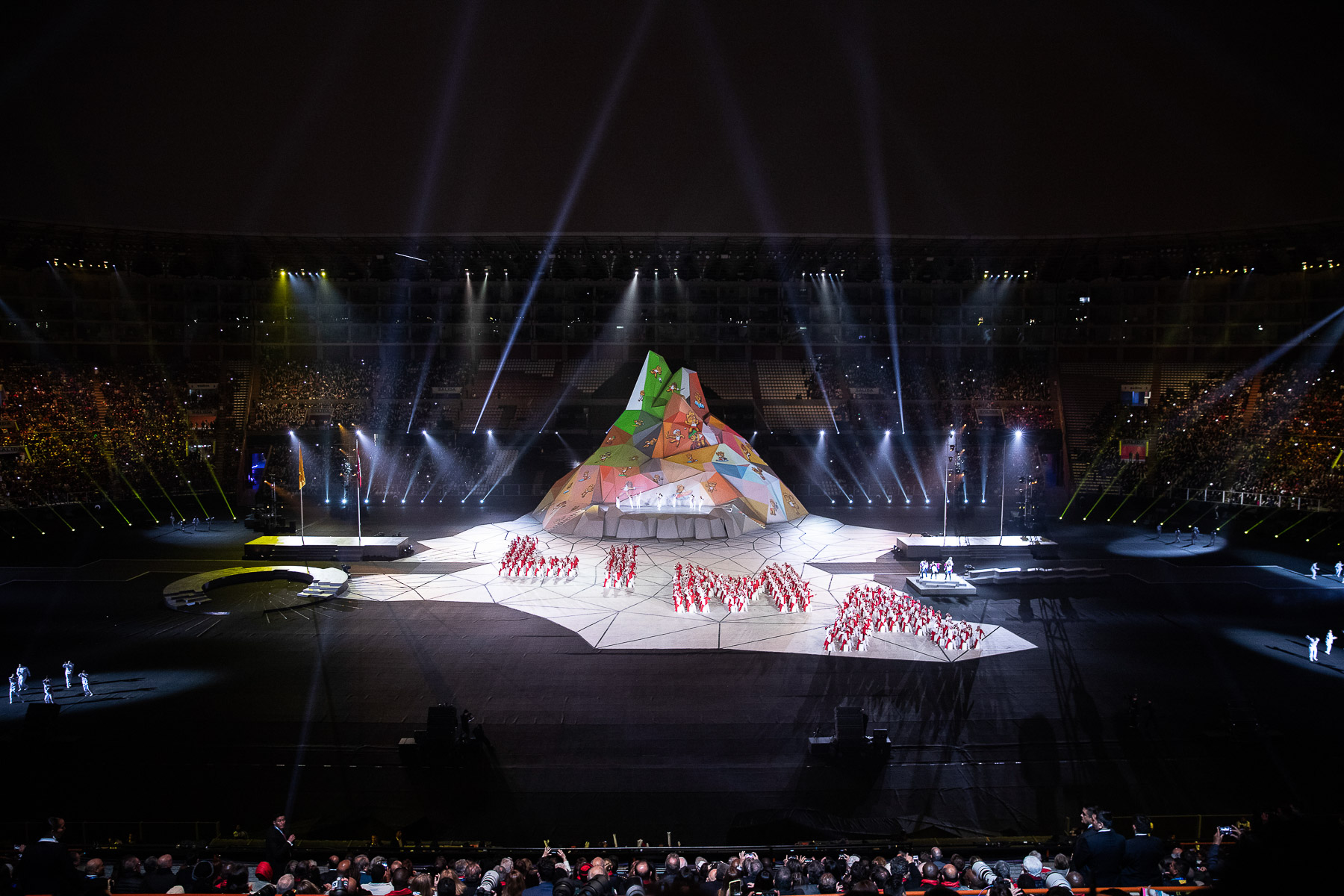 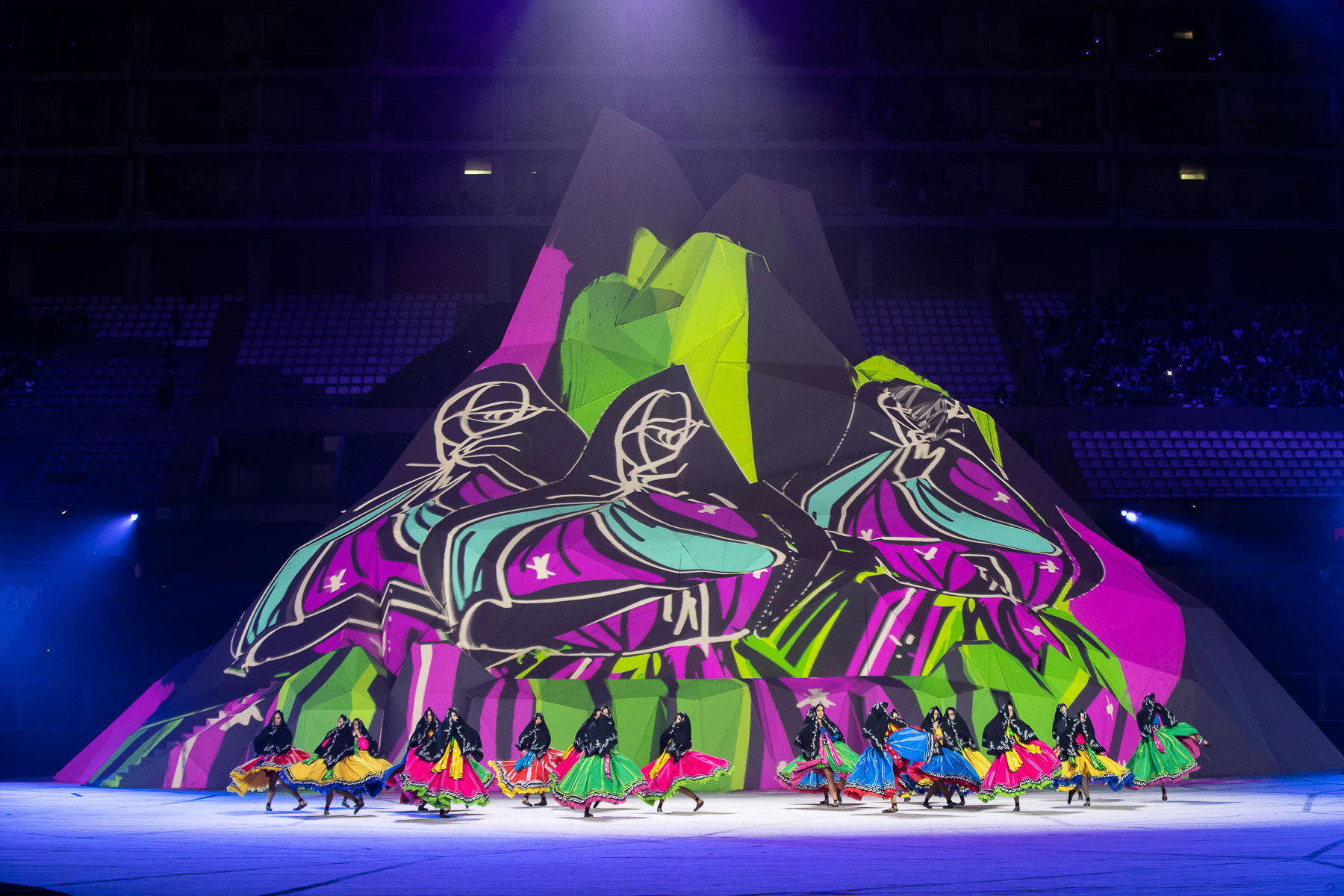 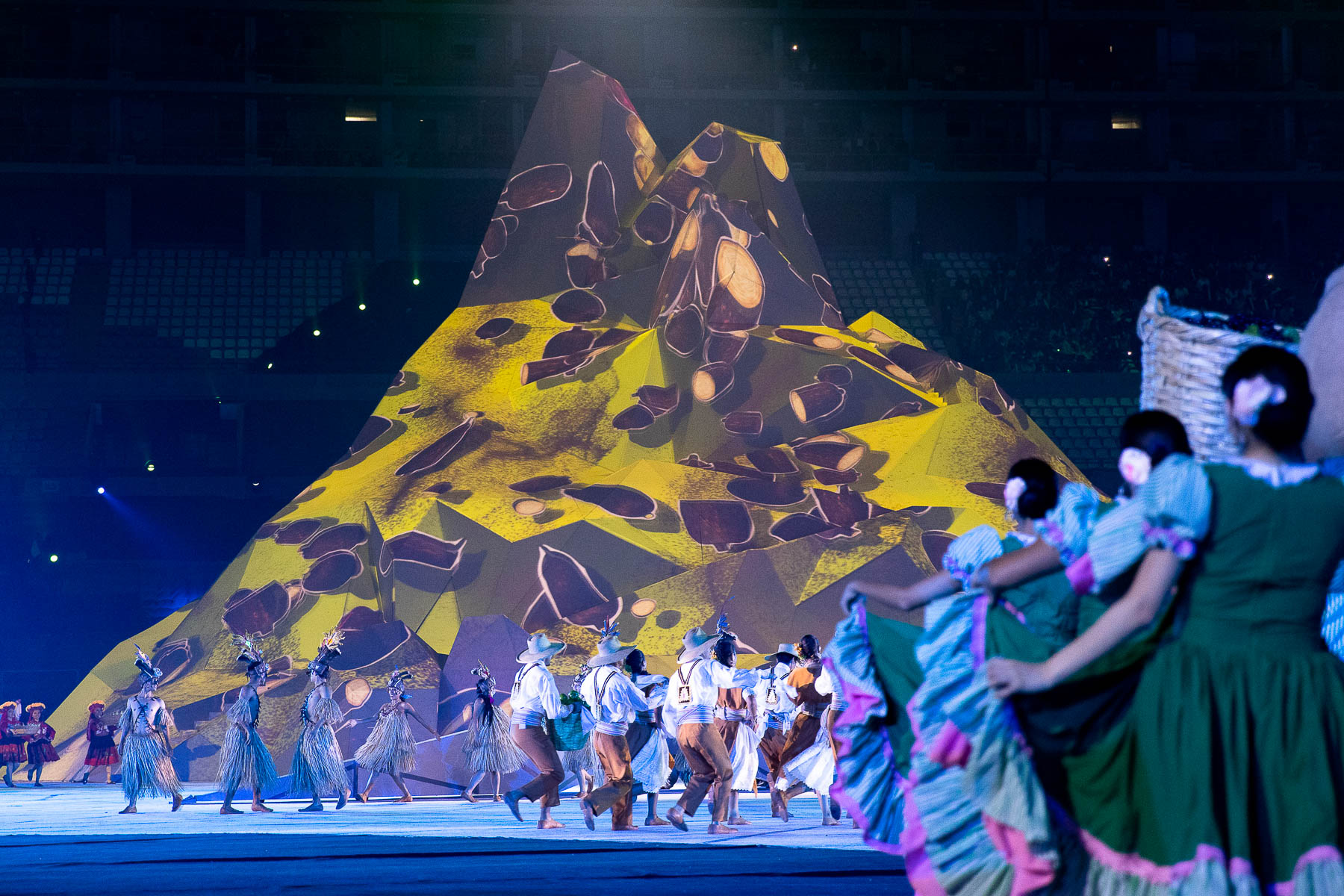 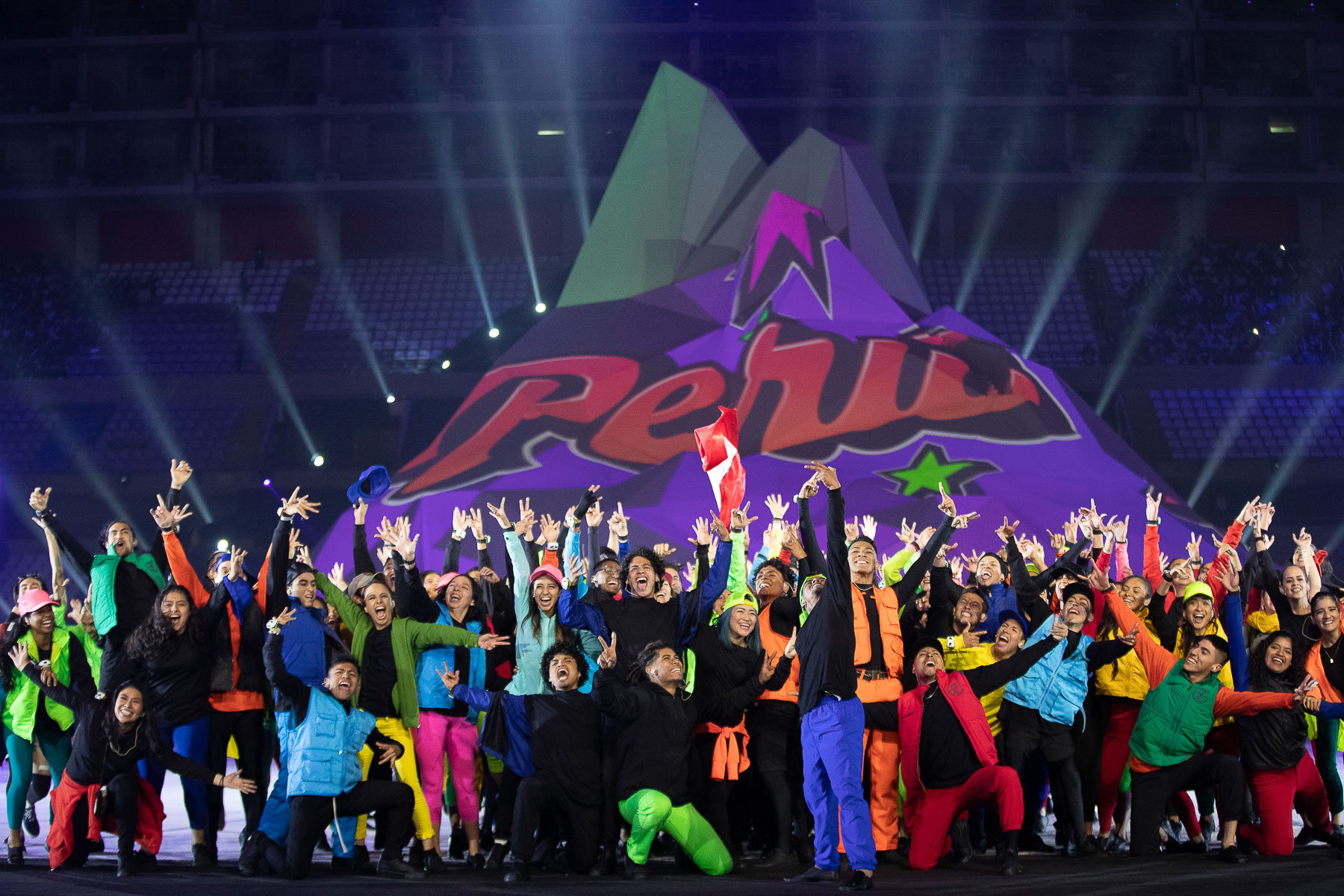 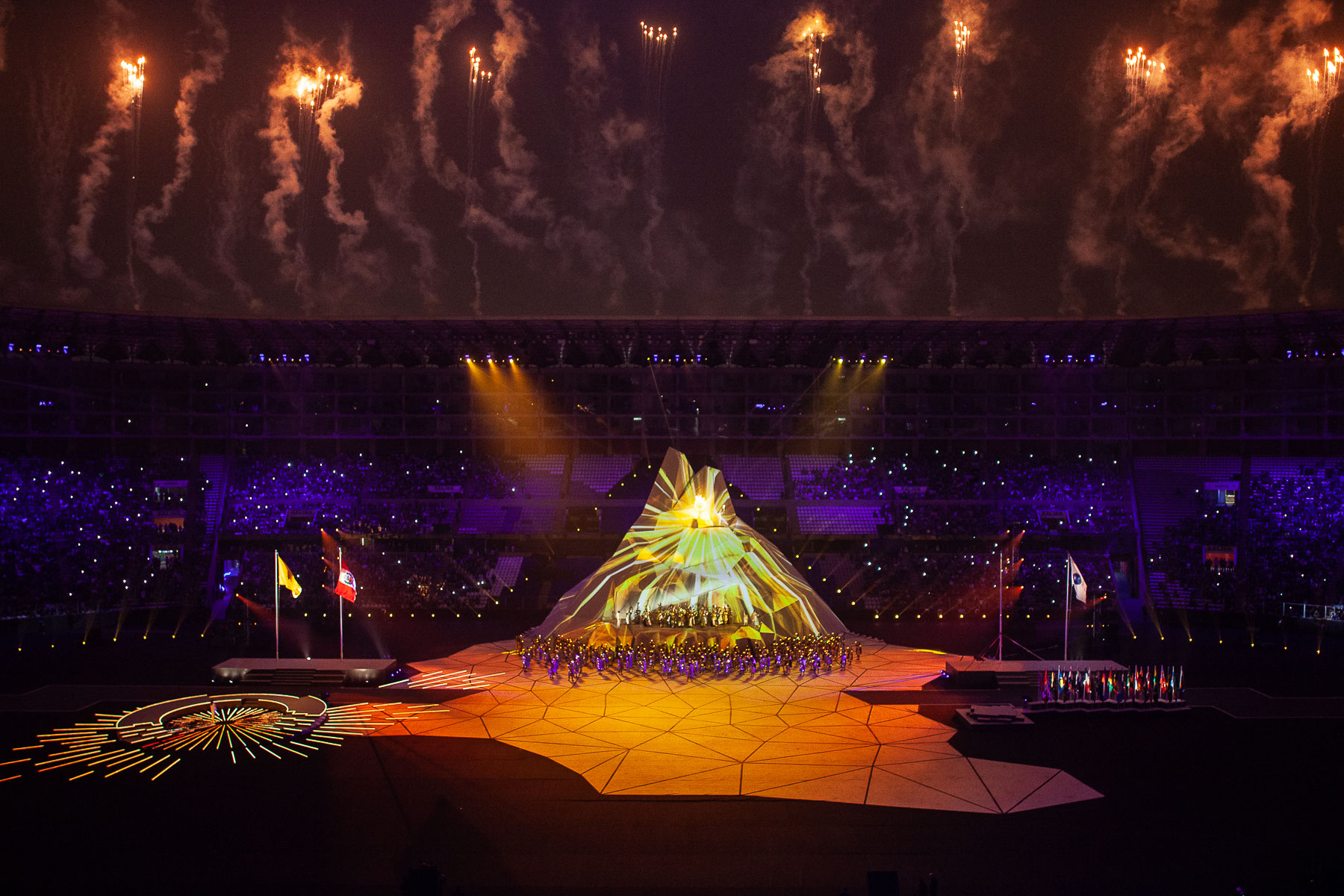 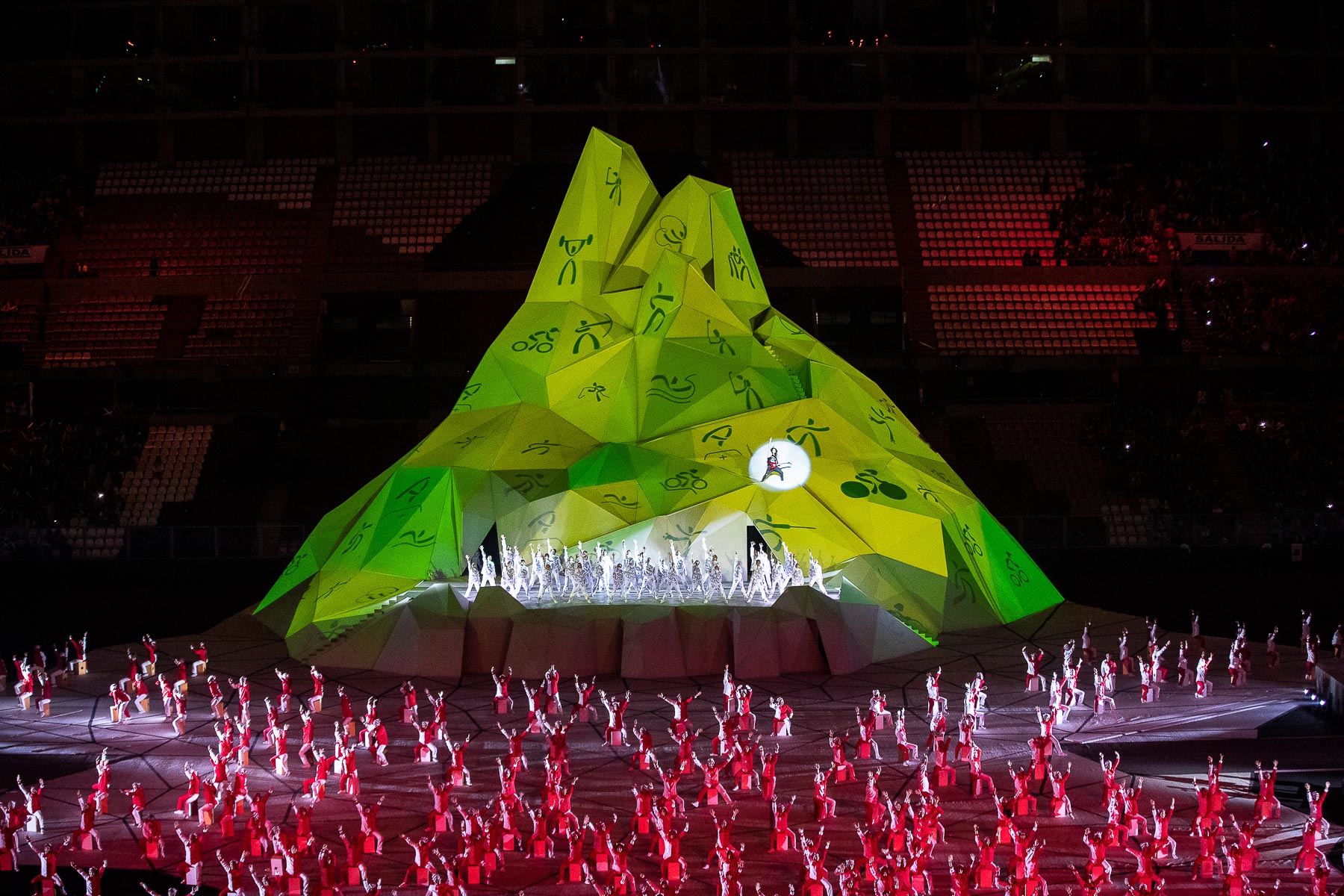 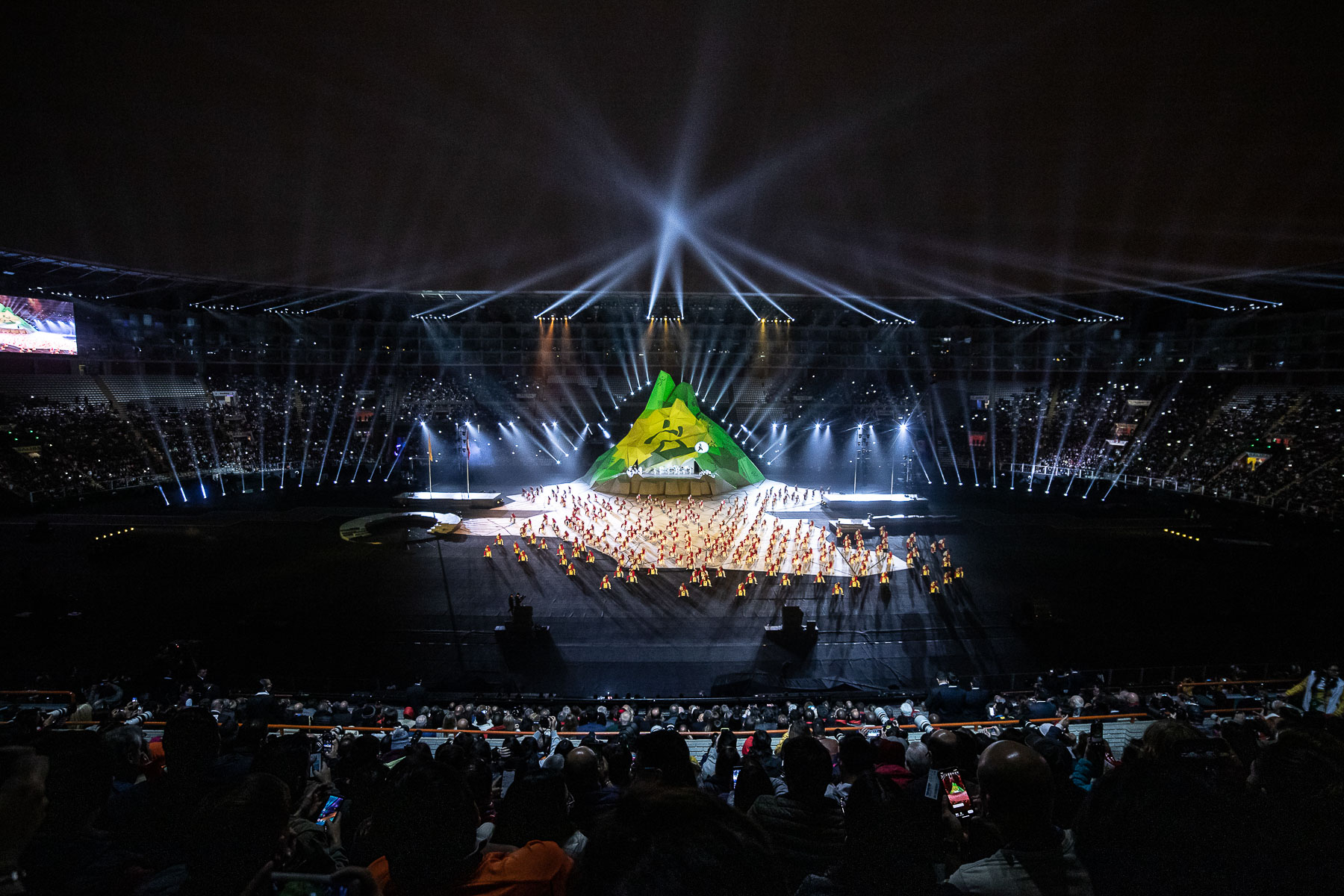 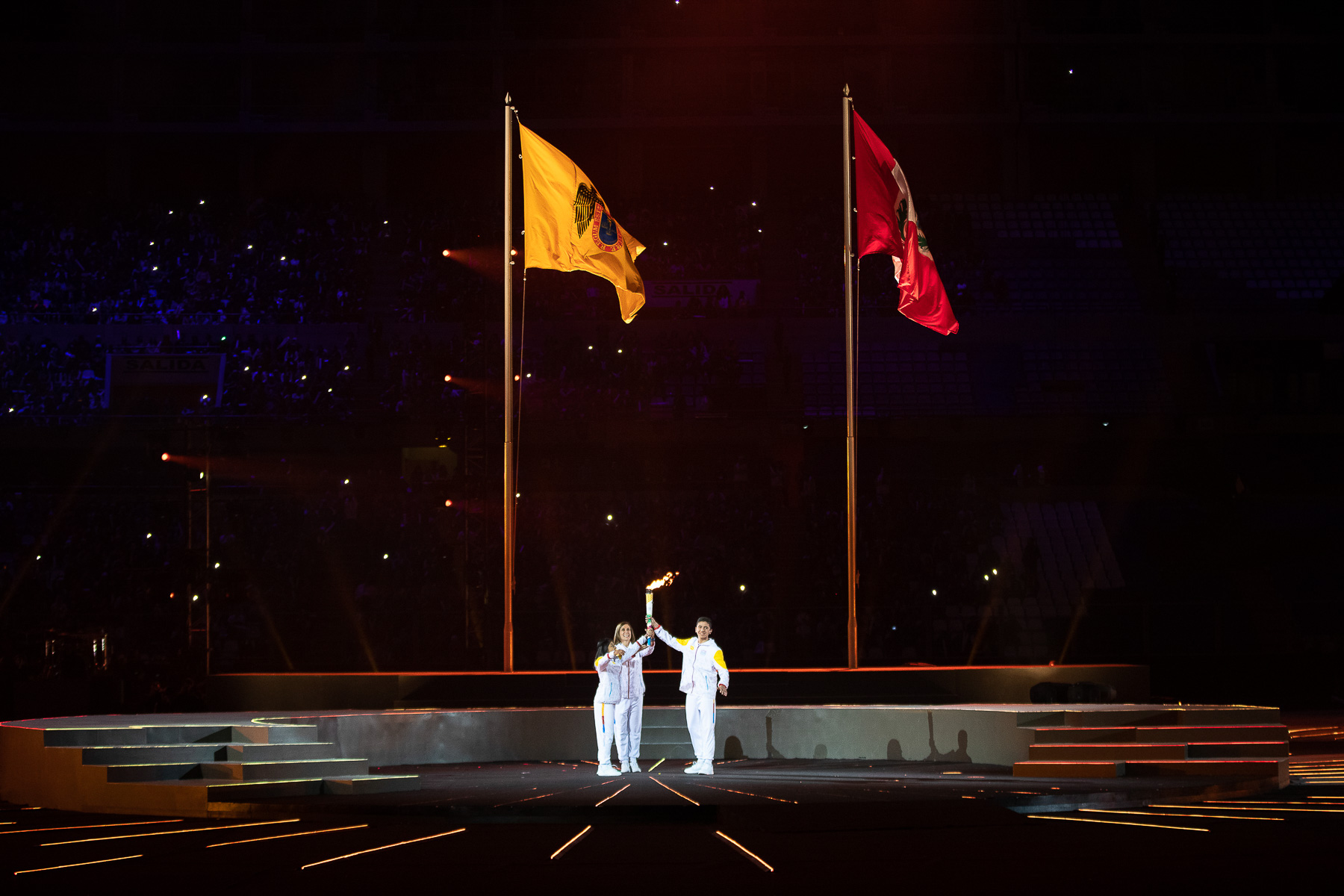 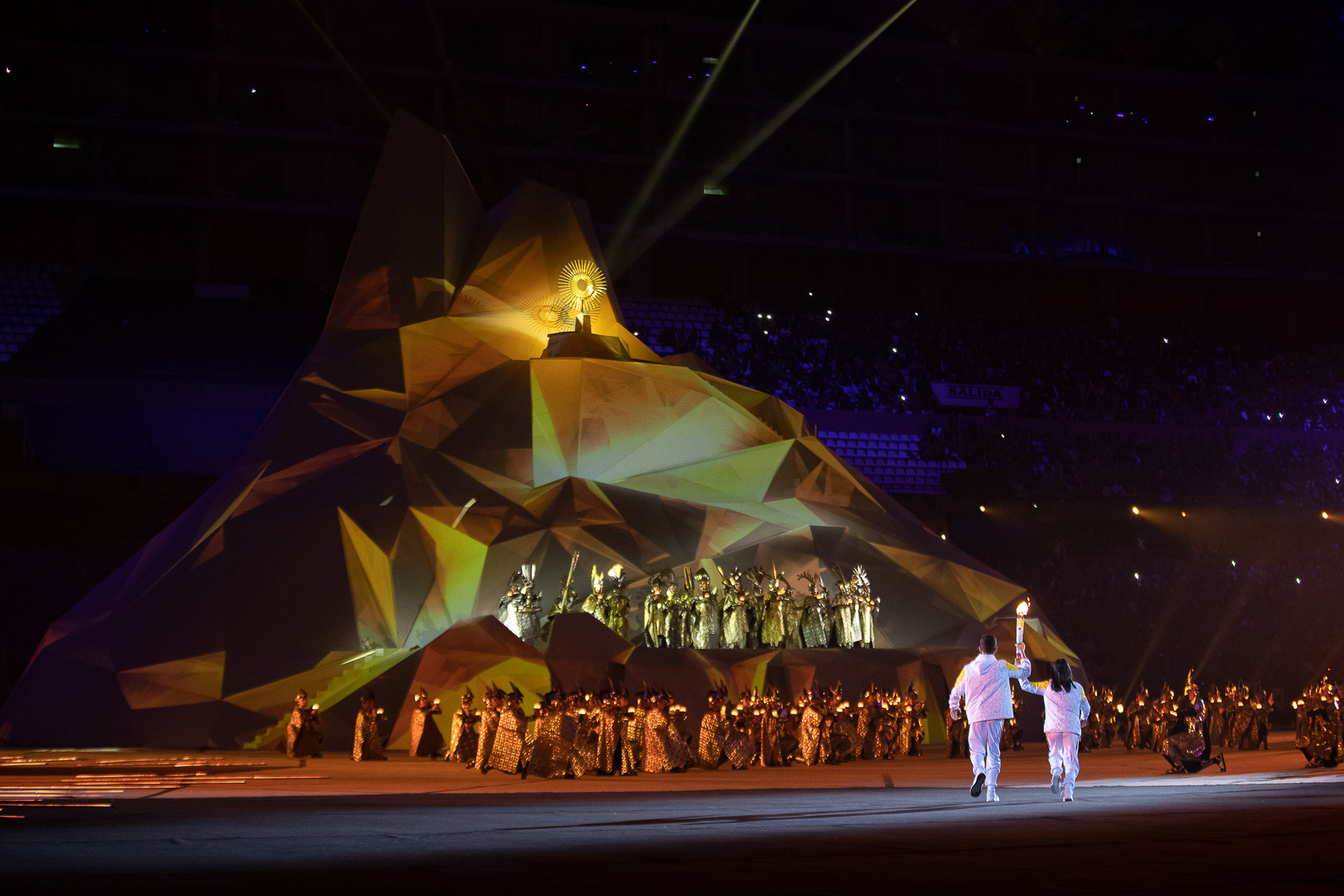 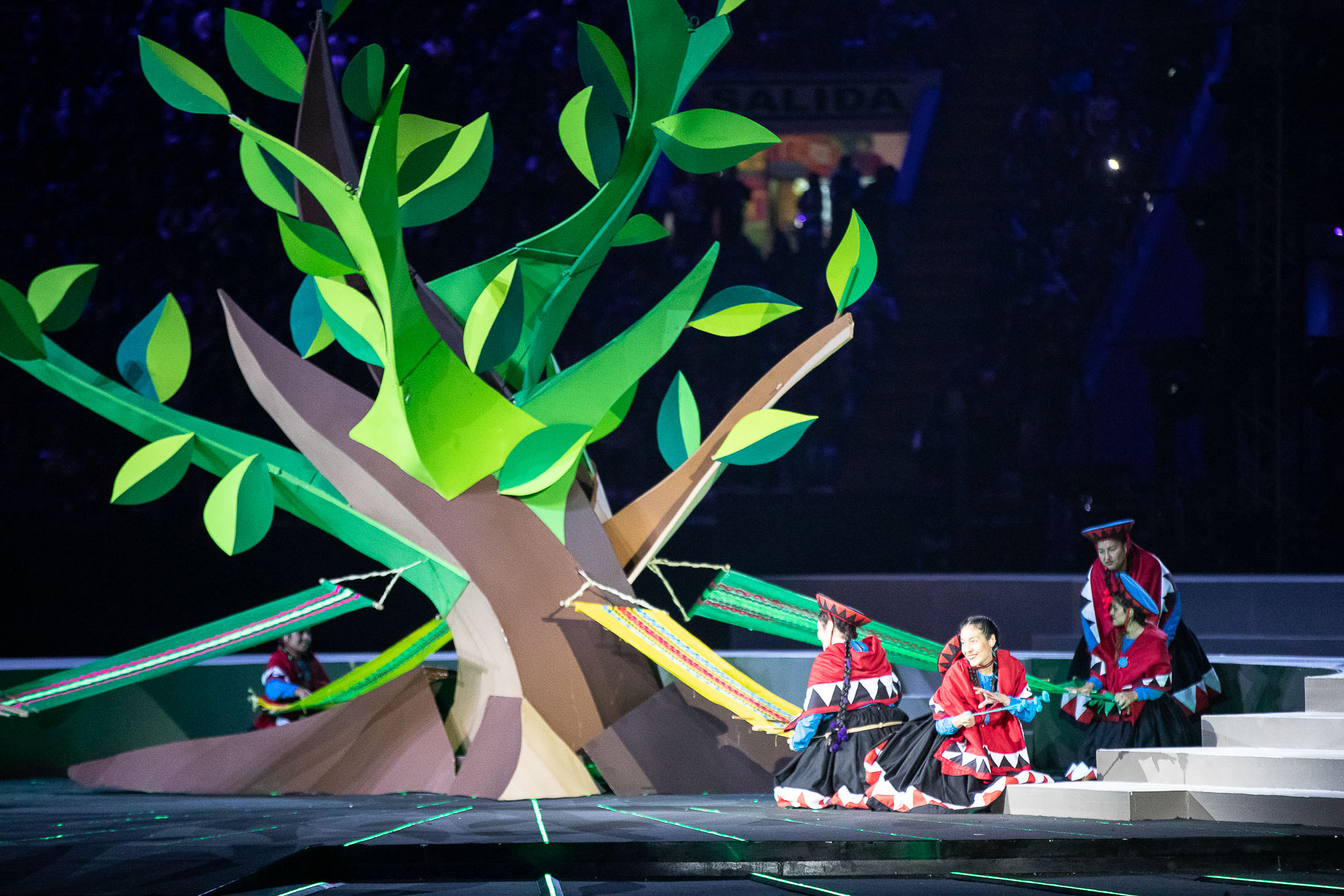 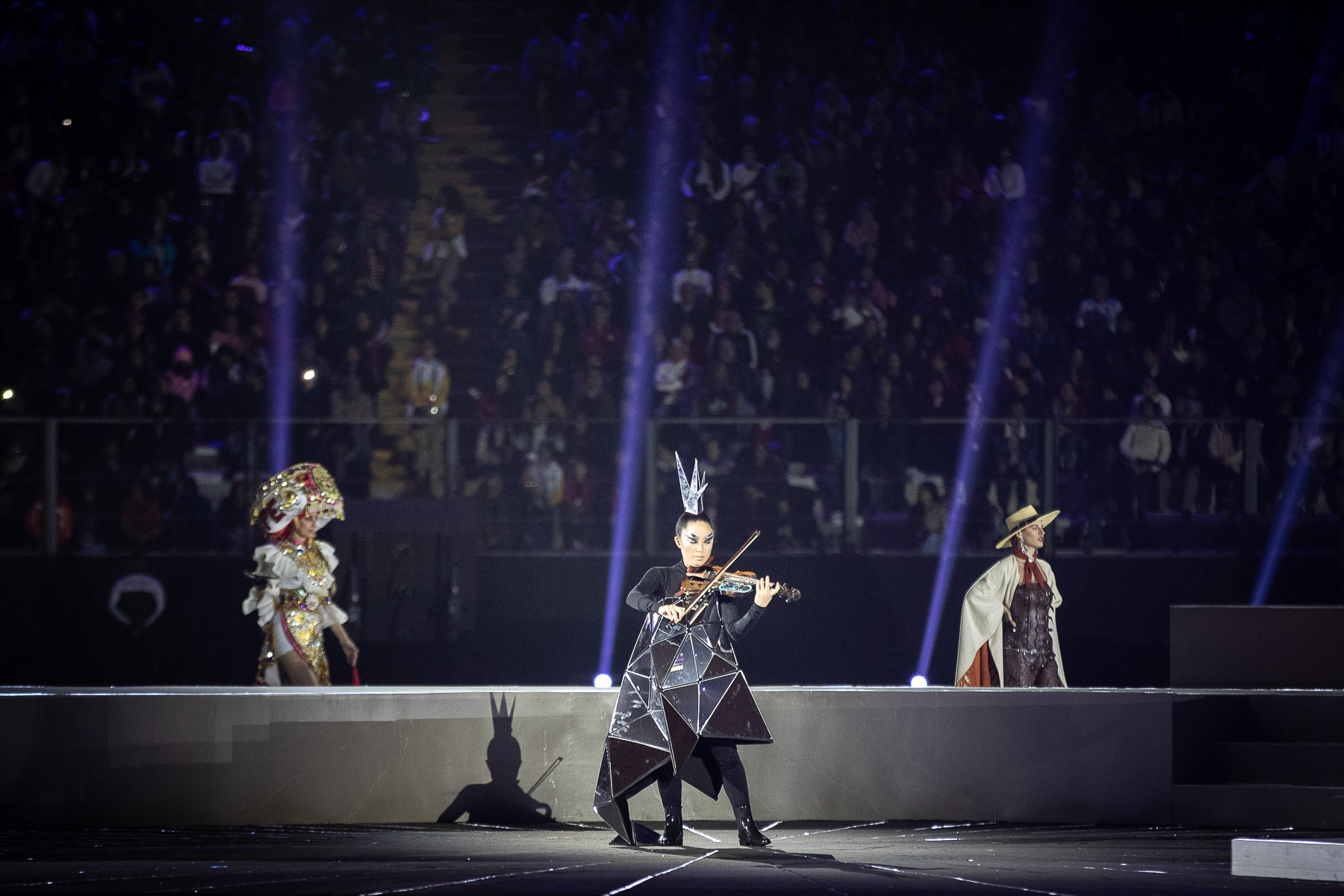 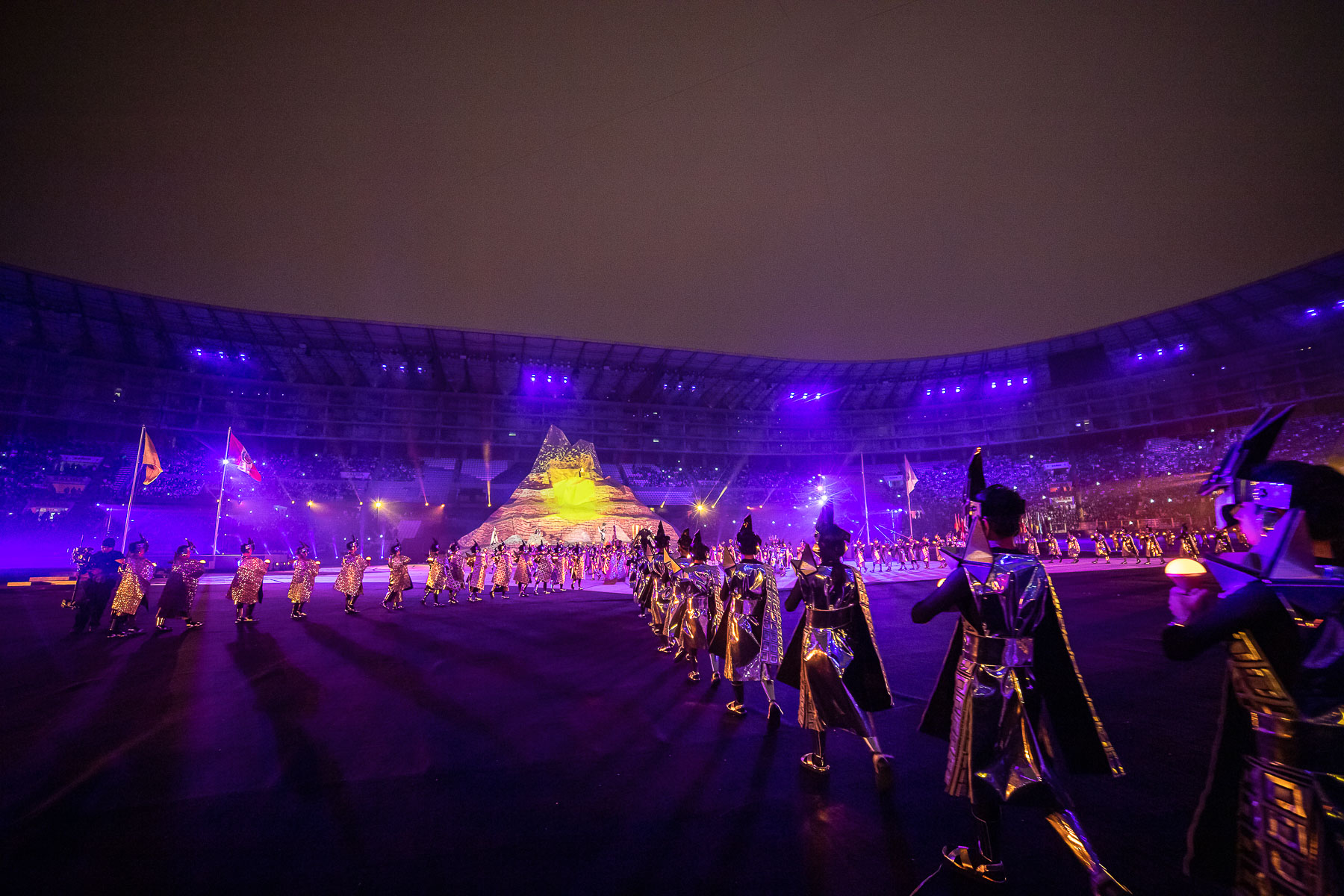 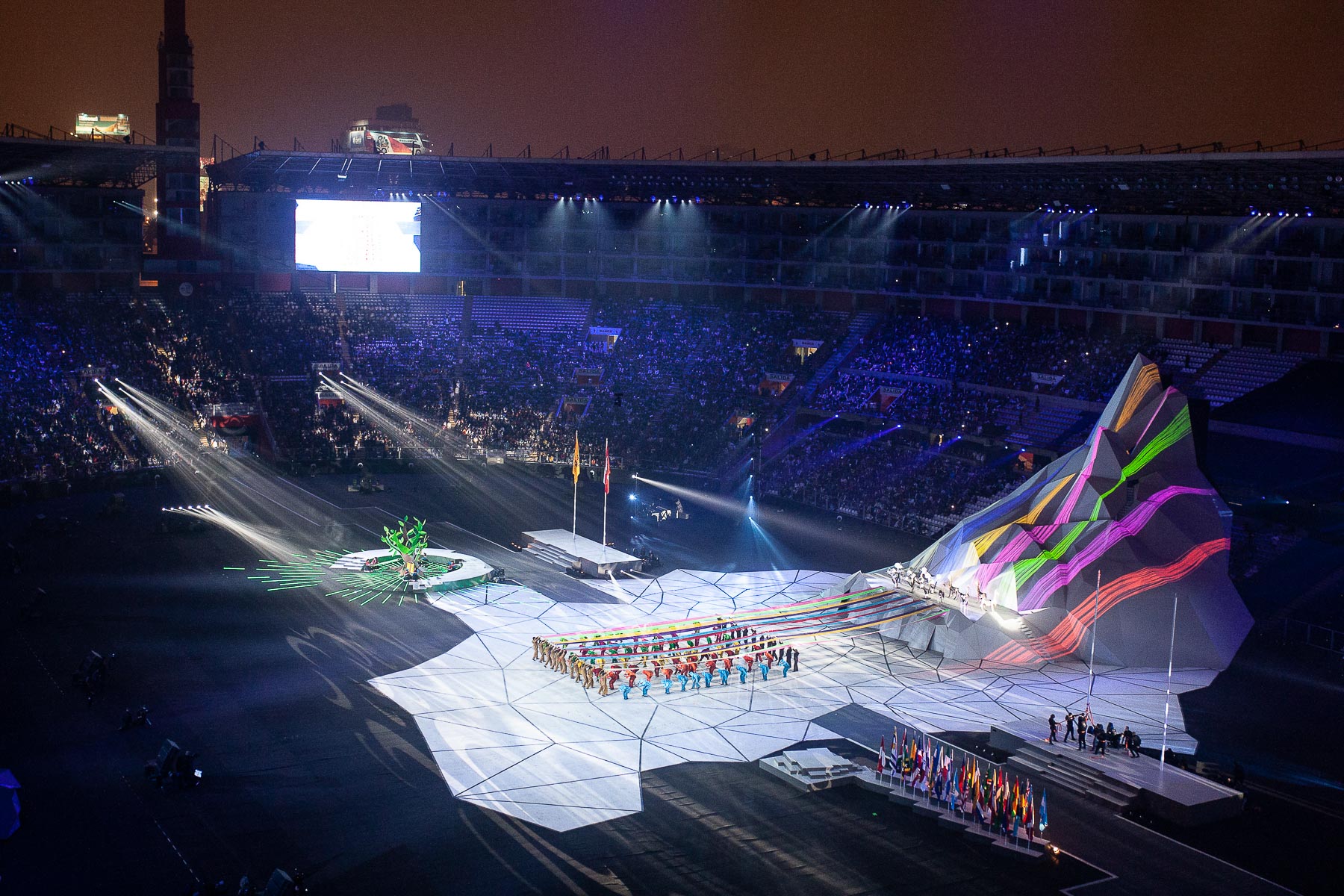